Bird Island was smelly. Muddy, stinky and disgusting but somehow amusing. How we found it entertaining I don’t know, but for now we decided to take a break from repulsive poo filled mud, for a fishing trip to the cliffs.

The drive was thankfully short. Directly east across expansive sandy plains, the short trip was a treat after the torture of our previous ones. The others were out of the car in a rush, eager to spot something on the horizon or see how large the waves were. Where I was still sitting in the car, hiding from the heights of the cliff. I would have stayed in the car and not gone near the cliff at all, but I was overwhelmed by peer pressure once again.

I soon found myself looking down the steep descent of the cliffs. Below was a large rock ledge extending into the ocean. The ledge was covered in ankle deep water, frothed up by the pounding waves. I’m not fishing off that…

Luckily, I don’t have complete psychos as parents, some sense popped into their mind and they made the right choice, to not go fishing off life threatening cliffs. Instead we continued searching for a more reasonable place to fish from.

Bay by bay, cliff by cliff, slowly we were discovering that it may be hard to find some where to fish safely, they all looked the same. After rejecting a couple of bays and several cliffs we came across a much larger one. This cliff had been eroded and a large overhang had cracked off. On the overhang perched a large nest, a sea eagle’s nest. Perfectly balanced on the edge of a steep and broken off overhang, I thought it should have been impossible for a bird to build such a masterpiece.

Over time we found more and more unusual nests, some perched on the rim of overhangs, some further away, towering over bushes and shrubs. 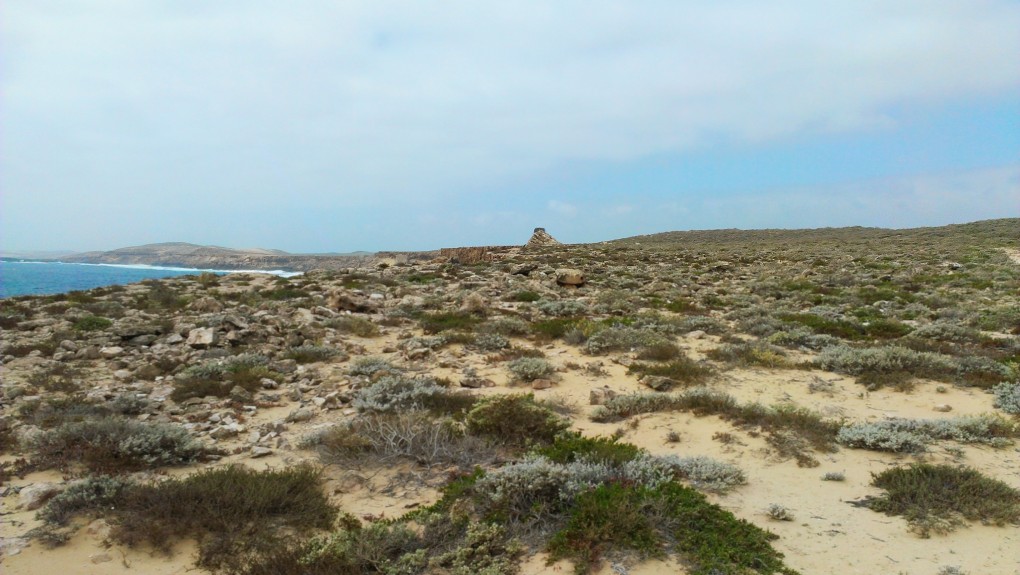 After seeing many cliffs and risking many heights, I seemed to be overcoming my fear. I was walking over to most cliffs and had actually became enthusiastic about seeing what was over the edge.

Eventually we made it to a smaller cliff. A lot like the others, eroded overhang, ledge at the bottom covered in water, only it was a lot less steep. This cliff was more like the one at Turtle Bay, but you still had to be crazy to climb down it.

I take back what I said before about my parents not being complete psychos, because before I knew it, I was half way down the cliff. Almost sliding down with the lack of traction, we carefully placed each step to avoid falling. We weaved our way down the slope then mazed through some boulders and we found ourselves at the bottom, on the ledge.

Almost as soon as Dad set foot on the ledge submerged in water he was off with his rod to somewhere he could cast.

Once I was down on the ledge something caught my eyes and they were locked immediately. Right next to where Dad was fishing was a massive blow hole a few metres wide. Every time a large wave came it would send water flying, sometimes over five metres. It was like putting your head next to a massive boom box, the roar of the waves gave you a fright even if you were expecting it. My eyes were locked onto it the whole time it took Mum, Grace and Audrey to look around and come back, chop some bait and watch Dad fish. Eventually my eyes decided they wanted to look at something different so they dragged me around the ledge to look in rock pools.

Around on the massive ledge were many large pools where the rock had been eroded away. The rock pools were filled with colour of the glowing coral and seaweed, small fish, crabs, anemones, corals and seaweed. The water was crystal clear, showing everything underneath like it was glass. It was better than snorkelling.

My eyes had taken me from the massive blowhole to the rock pool, they then took me all the way across to the other side of the ledge where I climbed back up onto a higher ledge. On the higher ledge were more eroded holes in the rock. Water had obviously been trapped in the holes before it dropped because there was a layer of salt sitting in each one. The top layer glistened in the sun, eye piercing white. Grace and Audrey were both amazed that they decided to collect some to bring home with us.

I kept walking, distracted by almost everything I passed, it took me almost half an hour to walk 50 metres as I kept zoning out on anything unusual. I kept stumbling on rocks sticking out of the ground, I was in my own zone, oblivious. But I was soon woken from my pleasant daydream and found myself sitting in a small cave at the point of the bay.

I could see Mum and the others all back at the spot where we had dumped our gear, Dad was still fishing and Grace looked keen for a turn. I decided to head back before I got forgotten and start missing out on the fun.

As I headed back I realised something different sitting in one of the rock pools. It looked shiny like a high-vis t-shirt but I couldn’t make out what it was. As I got closer it seemed to be bulging out of the water and giving off a pinkish glow and I immediately knew what it was. A nice, big… Pink Snapper.

It wasn’t just one pink snapper but two, and soon going to be three. Dad was on fire, catching fish by the minute, and for once, I was inspired to go fishing.

Half an hour and three fish later, I still hadn’t had a go. They weren’t getting any more bites so we decided to move. Fortunately, we moved further towards the left side of the bay, closer to the cave I had found and wanted to show them all.

Dad quickly set up again, had cast out to sea, and within seconds he was hooked again. But he couldn’t bare the continuous nagging from Grace and I anymore so he passed us the rod.

Grace went first, but no luck. She spent almost half an hour with the line in but didn’t get a bite. She was soon ushered off by Mum who really wanted some of the action. It was like she had four arms as she changed the hook and sinker, then baited up in seconds. One large blink after the last hour of staring, she had tossed the line and was prepared for a big fish.

After another half hour of waiting, a long search through the snacks bag for something appealing and a few minutes of staring at the large blowhole, Mum was hooked to a fish that seemed to be putting up a fight. Slowly but surely she pulled it in. Only to find that it proved to be smaller than the last three Dad had caught. 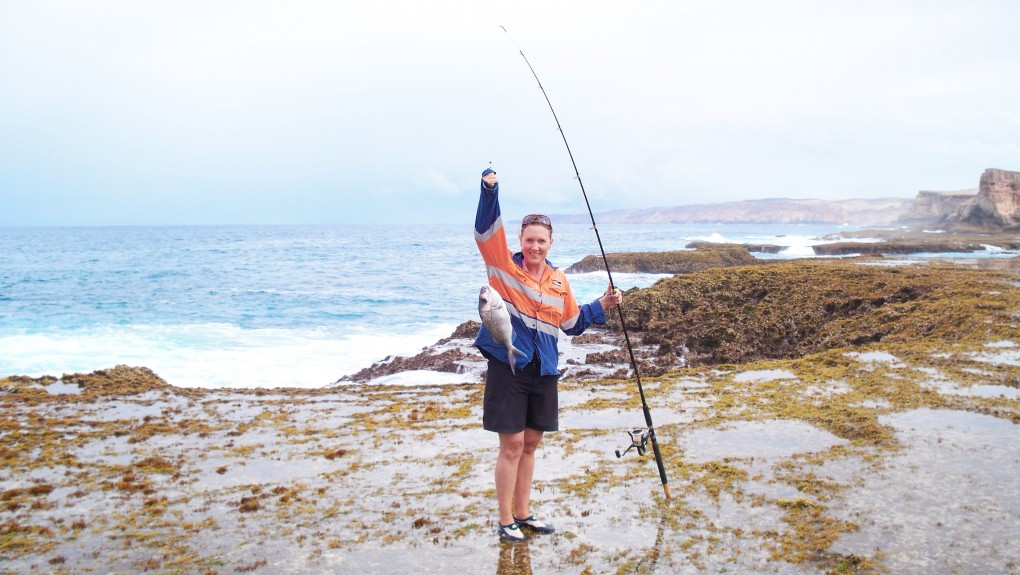 Finally, after being skipped by Mum, it was finally my turn fishing. That’s when the thought struck me, why did we only bring one fishing rod? I had no idea how to set the bait up, neither how to cast. I don’t usually like fishing, it can be boring waiting and I’m not too fond of eating fish.

Unlike Mum with her arms of speed, it took me about ten minutes to bait up and get it into the water far enough to catch a fish. But apparently you don’t need skill to catch a good fish, because I was soon almost pulled off the ledge when a fish took the line.

My eight-year-old muscles were struggling to hold on. I kept slipping and becoming closer to the terrifying edge. I had no skill in pulling in large fish so all I knew to do was wind, and keep winding.

Dad was standing next to me, trying to give me lessons on how to pull it in without taking the rod out of my hands. It was going to be the biggest fish I had ever pulled in and Dad didn’t want to ruin my bragging rights by helping me too much.

Five minutes felt like five hours when I was barely gaining any ground. Or should I say, water. I could feel my heart racing, my hands shaking and Dad hesitating whether to take the rod from me or not. I was about to give in, I didn’t think I could take it anymore as my arms felt like they would fall off any second.

The rod was jumping around everywhere as the fish tossed and turned. I had become close enough to the edge that Dad grabbed me around my waist to prevent me from falling. My face was blood red, steaming with effort.

Fingers slipping, legs tripping, it was no use. Dad had to take over, I couldn’t do this alone. Still struggling, I tried to call out to Dad behind me. “Dad…” I managed to pass out of my exhausted lungs. “Please…” My face screwed up as I tried to pull the rod closer to Dad. My voice only just loud enough to be heard over the breaking waves. “…Take the” My arms were already letting go…

Just before Dad figured out what I said something flew out of the water and Dad and I almost fell backwards as the line went slack. I was filled with disappointment when I figured out what happened.

I had lost the fish. I had spent almost half an hour trying to pull in one fish. The fish that was going to be my biggest, it was… still on the line?

A second later my arms were yanked once again by the painful force of the fish returning to the water. on the end. Our battle continued, but this time the winner had been decided. The fish was now barely putting up a fight, other than the odd yank on the line. I was gaining.

Soon enough the fish was out of the water and I was filled with joy. My heart almost stopped and I was left exhausted from the fight. I was proud of myself, the massive fish I managed to pull in won the competition by default. It was larger than Dad’s and twice the size of one of Mum’s, there was no more room in the rock pool where we had been keeping our trophies.

A large bag full of sparkling sea salt. Another full of snapper.  Sore arms and shaky legs. A cliff to climb up. A struggle we faced, but all for good cause. To go back to the homestead and cook my winning fish!