I was falling. No. I was moving forward, flying. Everything was dark, then light, and dark again. Flashes of colour strobed like a disco in my mind, I was numb, but I could hear people laughing. They were saying my name, laughing again, saying something about drooling. I puzzled, where was I? Why couldn’t I see what was happening? Why are they laughing at me? I was shaking, vibrating, like the ground underneath me was too. I was still moving, fast. Someone cheered, followed by a familiar high pitched squeak, they were playing a game. My eyes opened…white line…

Four pairs of eyes gazed through me.

‘Good morning sunshine’ Dad said, looking at me through the rear-view mirror. I cringed, then frowned when I remembered where I was. ‘That’s gotta’ be the first time you’ve ever slept in a car, since you were a baby.’ He said.

‘Goes to show how boring this drive has been.’ I mumbled, grumpily, trying to show my boredom.

‘At least you sleep-ed.’ Audrey giggled with her classic 4-year-old’s grammar. The car was filled with laughter as I showed her the drool stain she left on my shoulder.

‘You can’t talk Audrey!’ I laughed.

Another few minutes in the car and we passed another sign. A good sign. ‘50km to go! Remember to stop in at the underground museum!’ I smiled.

Half an hour later, we finally arrived. It was like a dream come true, our over anticipated desire to ‘arrive’ had finally come true, but it wasn’t what we expected. We hoped for an oasis, filled with life and luscious trees, well, at least I did. When we arrived, I was shocked, surprised that I was completely wrong. I had no idea that a town in the middle of the largest desert in Australia would be so… desert.

As we drove into the town we came across many unusual signs. Maybe they have a thing for signs here. I thought. A lot of the signs were danger signs on the side of the road saying, ‘Danger, Unmarked shafts!’ ‘Don’t walk backwards!’ I wonder how many people have actually fallen into the mines. Then we passed another sign, the same as all the others, but older, and with graffiti all over it. 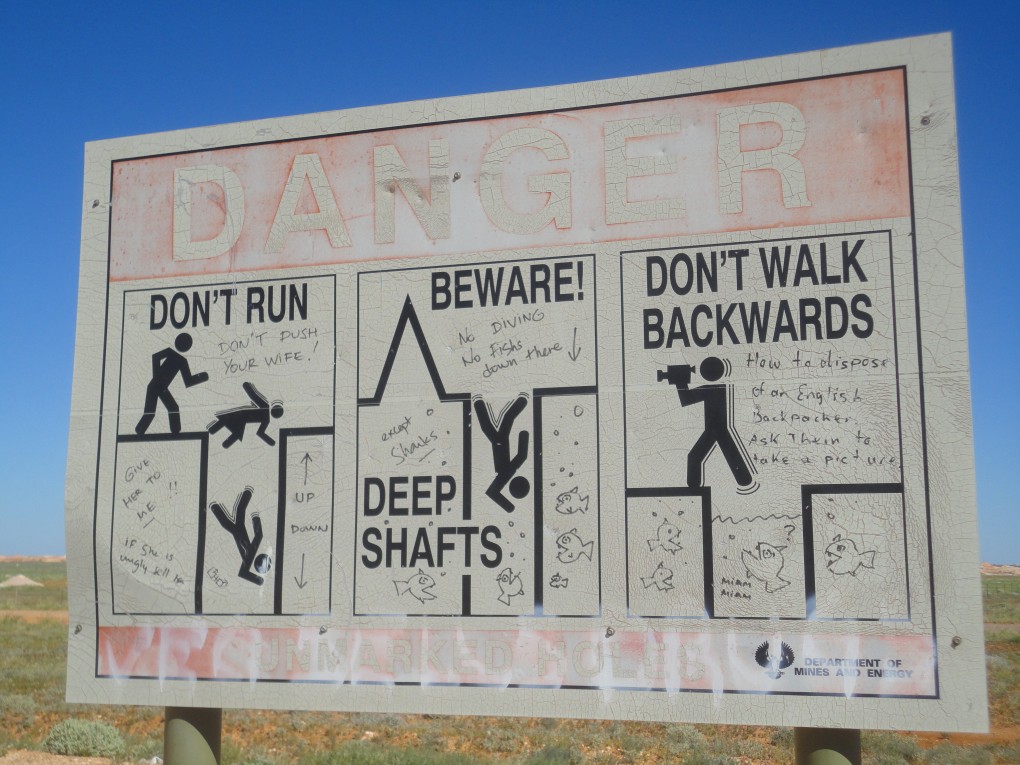 Everything in the town was stained orange, it looked as if it has just been hit by a sand storm. Most of the buildings above ground were either shops or businesses, one of which was crowded by twenty men, waiting to grab their evening liquor.

We cruised around the town, touring the back streets before settling into the caravan park. The sun was setting and it made everything glow tangerine, even more than it already was. I shivered as I watched the sun disappear over the dead flat horizon. My eyes, wide open, burning with the light. I couldn’t look away, it was beautiful. As the last sliver of sun disappeared behind the horizon, a cacophony of crickets echoed from tree to tree, surrounding and filling the town with their voices. I heard a bird, the first bird, the only bird I’ve heard for a long time. The unforgettable chirp of a budgie, then another, the power lines above us were perches for the flock. In five minutes that evening, the desert which I thought to be an ugly, lifeless expanse had changed completely. I learnt, the desert can be beautiful, you just have to look, and listen closely.